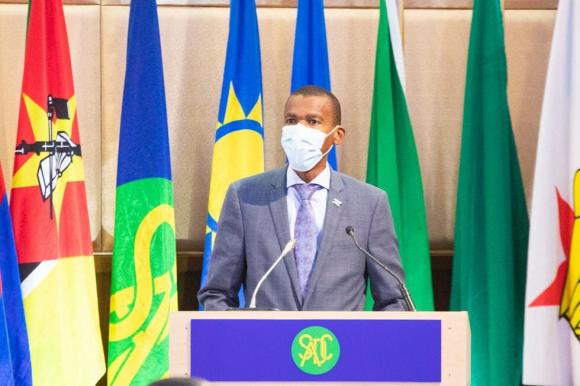 Botswana ...Africa must speak with one voice for the political emancipation of Western Sahara

Botswana has called on fellow African countries to “continue to speak with one voice” to support and stand in solidarity with the people of Saharawi Arab Democratic Republic. In his Africa Day statement broadcast through various media channels today 25th May 2021, the Minister of International Affairs and Cooperation Dr Lemogang Kwape reiterated Botswana’s full commitment to the African Union and its blueprint Vision of Agenda 2063.

In this connection the minister amplified the call for the “political emancipation” of the Western Sahara through the African Union, the United Nations and other relevant bodies.

Dr Kwape noted that 58 years ago, the Organisation of Agfrican Unity – today’s African Union (AU) was founded on the principles of self-determination, freedom and political independence and that to this day, these values still remain the cornerstones of the Union and key components for development.

“Regrettably, today we still have some countries on the Continent that have not attained their political independence and self-determination such as Saharawi Arab Democratic Republic (SADR)”, the minister noted.

At every given opportunity, whether at the SADC, AU or United Nations General Assembly, Botswana never misses the opportunity to support Western Sahara’s fight for self-determination and freedom from the occupying forces of Morocco, a fellow African country!

President Dr. Mokgweetsi Masisi has also joined the chorus to condemn Morocco’s illegal occupation of Western Sahara and has gone further to host high-level officers of Western Sahara such as its Foreign Minister, Mohamed Salem Ouid Salek and its President, Btahim Ghali.

The Organisation of African Unity was founded on the 25th of May 1963 when the leaders of the then 32 independent African states gathered in the Africa Hall in Addis Ababa, Ethiopia to sign the OAU Charter – the precursor of today’s AU Constitutive Act, which came into being in 2002 in Durban, South Africa.

Dr Kwape explained that Botswana joined the African Union a month after attaining independence in 1966 and that the country proudly stands with its African brothers and sisters today as “we celebrate the milestones achieved thus far through our continental body”.

The minister began by paying tribute to African men and women who bore the brunt of racial discrimination and deprivation of basic fundamental rights and freedoms,, saying that despite the injustices they faced, they had a common aim, great resolve and collective purpose to secure a better future for this continent and its peoples.

Turning to the AU Theme for this year’s celebrations – “Arts, Culture and Heritage: Levers for Building the Africa we Want” – Dr Kwape said it was aligned to Aspiration 5 of the Continent’s Agenda 2063, which calls for an Africa with a strong cultural identity, common heritage, shared values and ethics.

He said the theme calls for Member States to invest more resources in promoting national and regional cohesion by investing in African Culture and heritage as a vehicle for promoting and achieving the national economic and social development.

This theme, he said, resonates well with “our aspirations, as is in line with the great value we place on our culture and heritage”.

Among others, Kwape said that as a nation, Botswana continues to engage and consult its traditional leaders, namely members of Ntlo Ya Dikgosi in making key decisions.

Ntlo ya Dikgosi play a key role in assisting Government to ensure that “our heritage and culture underpin our development goals”.

Dr Kwape also observed that this year’s celebrations are being held at a time when the Continent is still grappling with the challenges of Covid-19 pandemic.

He said that many African countries are facing a bleak future as economies have been negatively affected by the scourge of Covid-19.

Kwape shuddered at the thought that the pandemic has the potential to erode the progress made by the Continent in the fight against poverty and other social ills.

“It is therefore imperative that we double our efforts and work closely together to prevent the disease from spiralling out of control, claiming more lives and further affecting livelihoods”, he suggested.

However, notwithstanding this, Kwape said the pandemic has provided an opportunity for the Continent to re-examine its socioeconomic priorities and strategies to achieve sustainable development within a reasonable period of time.

As a result, he said in their quest to promote sustainable socioeconomic development, Africa’s leaders have identified through their Continental Vision of Agenda 2063, 16 key Flagship Projects which have to be effectively implemented.

These projects include the African Continental Free Trade Area (AfCFTA), which came into operation in January 2021 and aims to provide a single Continental market for goods and services within the Continent.

Kwape reiterated that the AfCFTA endeavours to bring together all African countries with a combined population of more than one billion people and a combined gross domestic product of more than3.4 trillion US dollars (USD) thus creating the largest free trade area in the world.

He said it is estimated that once fully operational, the AfCFTA has the potential to reduce the number of people living in poverty in the SADC region by 3.9 million.

Botswana is therefore working very closely with the rest of the AU Member States to ensure that the Continental bloc realises its potential and brings about the envisioned economic benefits, Kwape said.

The minister pointed to the recently-opened Kazungula Bridge between Botswana and Zambia as one of the major milestones under the African Union integration Agenda.

Kwape hailed the Bridge as a testament of Botswana’s commitment to Regional and Continental integration as it allows efficient transportation of goods between Botswana and Zambia and enhances trade throughout the continent.

“Against this backdrop, as we commemorate this important day, I encourage us to continue to take advantage of the opportunities provided by our forefathers and foremothers to realise an integrated, prosperous and peaceful Africa”.

Kwape said that Africa Day celebrations present a special opportunity for Africans not only to celebrate “our landmark achievements”, but to also reflect on “our future prospects” as well as reflect on the Union’s transformation over the years, its shortcomings and successes.